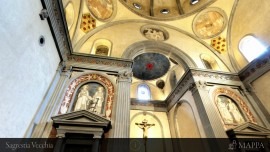 in Florence and of the visit to the exhibition with works by the Master Antonio Palma on Don Lorenzo Milani
The expansion project of the Museum of the Treasury of the basilica of San Lorenzo has planned the construction of a new hall dedicated to the exhibition of five tables, with drawings in black stone and red stone, found in the pulpit of the church and Donatello, in part, related to the work of Jacopo Pontormo. At this intervention must then add the realization, in the hall of the Treasury, a new showcase for storing eight precious reliquaries that were still preserved in the basilica in the closets of the Chapel of Saints Cosmas and Damian. To display all the works have been the subject of a careful and thorough restoration.
Upon completion of the intervention was also prepared a multimedia apparatus and an update, with scientific review and the English translation, media information.

Sorry, the comment form is closed at this time.